I have to admit that I’ve been kind of down on Sweet Valley lately. I mean this is a series that is so bad – the fact that I love it, read it, and laugh at it, that it makes me feel guilty, and I wear that guilt with pride. But lately, the books have just been bad. I’ve felt that I needed a break, because life is too short… and then I read this. This book is so ridiculous and moronic and “Oh my God!” that it was a scream to read. I loved it! Just when I began questioning my love for one of my guilty pleasures, the next book serves as a reminder of all of the reasons I love these books. Prepare yourselves for mean girl feuds, TV spots, a nationally-broadcast talk show, twin switches, high school schemes, police, a humor column, and all kinds of other foolishness. The best Sweet Valley High book that I’ve read in months – and thank God, because I was really starting to waver…. 😉

When national TV talk-show host Eric Parker comes to Sweet Valley and announces a contest to find the perfect American teen, Jessica Wakefield vows to win the coveted spot as Eric’s special TV guest. After all, she’s meant to be a star! But when Jessica’s best friend, Lila Fowler, announces she’s going to win the spot, the contest becomes a battle of wills and wits. With the help of Bruce Patman, who has his own score to settle with Jessica, Lila devises a brilliant scheme to ruin Jessica’s shot at stardom. Will Jessica have her moment in the limelight, or will Lila succeed in stealing the show?

Eric Parker is a big deal TV personality who is originally from Sweet Valley, so of course he has to come back to his hometown and interview “a perfectly ordinary high school student” for his national talk show, because that is why people watch talk shows, right? Seriously, this is one of the most unbelievable elements of the book – what were his producers thinking? So naturally, almost every student at Sweet Valley High applies for the spot, but Jessica Wakefield is determined to get it. So is Lila Fowler, the richest girl in school and Jessica’s best friend, and greatest rival. Seriously, they are the original frenemies. 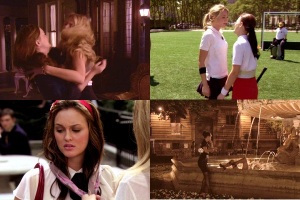 The application seems kind of lame and very on point with a basic college application without the personal essays or actual involved aspects. The key is to be well-rounded and “just like any other teenager” so right away Jessica has an edge on Lila. Lila’s father owns half of Southern California and Lila believes that anyone normal should be shot on the spot – the common riffraff they are. But since the application doesn’t exactly ask for information about their families or assets, Lila can pretend for the sake of TV that she really is ordinary.

I expected Jessica to make up all these wild crazy stories, because that’s what Jessica does, but she doesn’t. She tries to figure out how to become more well-rounded before the application is due. She wishes she had something more academic to put on her application and Elizabeth tells her how the paper is looking for a feature for the next issue, and Penny Ayala, the editor, is desperate. Jessica calls Penny and Penny asks Jessica what her idea is. Jessica never thought ahead enough to come up with one! But Jess is best “in the moment” and quickly makes up an idea: The Worst Dates She Has Ever Been On. Penny loves it and tells Jessica to write it and show her at school tomorrow. Jessica does and what she comes up with is pretty funny. Her piece made me remember how much I love writing satire and realize that I haven’t done that in awhile. Anyways, everyone loves Jessica’s piece and it is going to be in the next issue. And now Jessica can put her work on her application just in time to turn it in!

I have to admit, I never thought I’d see the day that Jessica would honestly try at something when she could just as easily exaggerate or downright lie. I almost respected her for a minute. Lila, however, isn’t even trying because that would be beneath her – she just makes shit up, and Jessica knows it because she saw Lila’s application before Lila turned it in.

Apparently, there are so many wonderful people in the greatest town on earth (that would be Sweet Valley y’all, if there was ever any doubt) that Eric can’t choose a winner and narrows it down to six finalists: Jessica Wakefield (naturally!), Winston Egbert (class clown), Patty Gilbert (dancer, and token black girl at Sweet Valley High), Olivia Davidson (the artsy fartsy emo girl), Jim Roberts (photography buff), and Lila Fowler. The war between Jessica and Lila heats up and Jessica is ready to bring all of her charm, but Lila must know deep down, she can’t compete with a Wakefield, so she plays dirty. All of the finalists will be interviewed at school Friday afternoon, Lila is first and Jessica is last. There is a last-minute location change and that’s when Lila is struck with inspiration. After her interview she goes back to the original spot the interviews were supposed to take place where there is a note and explanation for the change of venue. After the person before Jessica arrives, sees the note and goes to the new location, Lila snatches the note and leaves school, congratulating herself. Lila is sure to win now because Jessica, who was her only real competition, is going to miss her interview! Not cool Li, not cool at all. I’m not a fan of Lila’s or Jessica’s but so far Jessica is my pick. She didn’t lie on her application and she isn’t resorting to this.

Jessica makes her interview anyway and decides to get back at Lila for the note when Eric asks her about her job as a candystriper she namedrops the hospital, since it was named after Lila’s rich father and Eric isn’t a complete tool – he makes the connection. Jessica wins the spot, and Lila gets runner-up as Jess’s alternate. Jessica makes sure to rub it in whenever Lila is around – it’s the least she deserves after the note trick, and I agree, but this just makes Lila determined to make sure Jessica will miss her chance on TV. Lila approaches Bruce Patman to help with her revenge scheme. Bruce is pissed at Jessica because she included him in her article on the worst dates of her life and said he kissed like a dead jellyfish. (Names were changed, but how many senior millionaires attend Sweet Valley High?) So, Bruce is on board!

Meanwhile, Elizabeth is all upset because Jessica’s article was well-written and everyone loves it. Maybe she’s not the “literary twin” after all? Oh my God, get over yourself Liz. So Elizabeth decides to become a junior ranger at Secca Lake and lead tours and nature walks and all that good stuff. She’s put in charge of all the other junior rangers because it’s Liz, but soon she realizes it’s just too much responsibility and something has to give. I mean don’t most people just have a single hobby? They can only devote themselves to one thing? What a joke. Still, Liz finds that spark – her love of writing and journalism – again, and she gives up the ranger stuff. Remember, it’s very important that both twins have a storyline in each book. 😛

The day of the interview, Lila takes Jessica to a boutique an hour away from Sweet Valley, telling Jessica that she needs a special outfit, not just anything from the mall. Jessica has to be at school in four hours, but they have time… When they get there, the two saleswomen keep staring at Jessica and Lila, as if waiting for them to do something wrong. Jessica finds an outfit and tries it on, but before she does Lila offers to take her purse. (DANGER! DANGER!) Once Jessica has changed, she asks for Lila to come take a look but gets no response. When she goes out into the store, she sees Lila through the window, getting in her car! Jessica runs out, arms waving, trying to stop her, when the saleswomen basically tackle her and call the police. Jessica was still in an outfit from their store so obviously she intended to steal it. Apparently, the stupid is not only in Sweet Valley, but the surrounding area. Seriously, who shoplifts clothing by wearing the new outfits out of the store, pausing in the doorway, with the tags still on?

When the police arrive, they tell the saleswomen that they don’t have enough evidence to charge Jessica, even though her story seems far-fetched. You think? The store manager argues and asks about all the other shoplifting incidents the detective that called earlier warned her about. Turns out Bruce called the store, gave them Jessica’s description and said she was on a spree and to be on the lookout. Jessica is off the hook, but there is no way she’ll make it back in time to do the interview. Lila has won. Jessica calls Elizabeth, and Elizabeth assures her Lila hasn’t won and isn’t going to. She tells Jess to get to school (where they are having the interview) as soon as she can. Elizabeth rushes to the school, posing as Jessica, and locks Lila in the dressing room. Yes! 🙂

(I should probably mention that Lila and Bruce have a random kiss before the interview. It was weird, not sure if it will happen again since they hate each other, which is funny since they totally deserve each other.)

Elizabeth is a smashing success, as Jessica, and Jess gets there for the end, but sneaks backstage so no one will notice her. After the interview, Elizabeth and Jessica trade clothes so that Jessica can bask in the glory of being quasi-famous. No one knows the truth about the switch except their parents, their brother and Elizabeth’s boyfriend, Todd Wilkins. No one finds out about it either! (And I should add that Jessica gets back at Lila, by tossing Lila’s keys where she can’t get to them, stranding her at school after the interview. An eye for an eye, and all that. 😛 )

Who needs enemies when you have friends like Lila Fowler or Jessica Wakefield? Seriously… But I am so happy that this book was what it was, because I feel re-energized to continue reading about the wonderful world of Sweet Valley High. Only another nine books to go before I think things will be on a semi-permanent upswing, and only twenty-nine books away from being at my goal (back to the Sweet Valley High I actually read back in the day). I’m so close… so close…