I have decided that this Coming Out Day, I am “coming out” on my blog – kind of. Technically I was never “in” any closet. I mean I talk about my husband all the time. But I have intentionally left out my gender thus far, because well, I reject gender as a social construct, and I don’t like people thinking of me as “masculine” and a guy or “effeminate” and girly, because I am both – I’m just me.

But because sometimes it can get dicey, purposefully avoiding gender pronouns, I’ve decided – enough already. It was fun having my gender be a question mark. And I wonder how many people who usually read my blog thought I was a woman, and how many knew I was a man (the few people who know me personally and read this do not count). Because in a society obsessed with sex (and not just the act of, but boxes, labels and prescribed gender roles) I know everyone that regularly follows and reads probably thought of me as one or the other. (That is totally fine, everyone is programmed this way, I myself tend to do it too.)

It isn’t about shame (I have been proudly out since I was in middle school, back before it was “acceptable” in the middle of Bible Belt-Nebraska) but because I just hate labels and how they can color how someone reads something. I don’t want to be taken more seriously because I happen to have a penis. And I don’t want to be taken less seriously or suddenly thought of as someone “with an agenda” just because I’m gay.

My blog has been a wonderful experience where I can talk about anything and everything (and I really, really do). From opinions on current events to personal stories about past relationships, my family or some health scares – I liked the place of anonymity that I wrote from. No one knew my gender/sex so while people might assume or just think of me one way or the other based on what I wrote – they were reading me. They were reading Michael. They weren’t reading gay-Michael, or male-Michael. Just Michael. (And I do know girls – yes plural – named Michael who spell it the same way, which is awesome, so I never considered this a giveaway.)

But I also don’t want to feel like I’m holding back or being dishonest or misleading. Because I have no problem with who I am – I just feel like I am more than the labels afforded to me.

So that’s my story, or my confession, or whatever. I’m gay, and a guy, but also a gender-bender that has long hair, and is probably considered “the wife” between my husband and me, even though I’m much more likely than he is to get in a bar fight, defending his honor. I’m a crazy, lefty, liberal, redhead that loves animals (PUPPIES!) and Buffy the Vampire Slayer. I’m a writer, a bookaholic and a bit of a hard-ass. That’s me.

Maybe now that I have been “outed” I can share other experiences that were “off limits” before. Growing up gay in Nebraska in the nineties wasn’t exactly easy and it definitely shaped my loud-mouthed, defiant, activist self. (Seriously, I was organizing marches before I was fourteen – I really was someone with an agenda. 😉 )

Anyway that’s all. I’m a dude that rarely uses the word dude. I’m a male, vaginally-challenged feminist that many see as the “woman” in the relationship, when in many ways I’m the “man”. That’s because I’m a human being before I am any of these things. And people are more complicated than the labels or roles we create for them. This point was my initial reason to have my gender be anonymous, and yet it’s also the reason I’m coming out now.

To make a point, and to open doors for me to walk through on future dates, discussing other topics that would have “outed” me on their own. And to be honest with everyone. My experiences, thoughts, feelings, emotions, and views remain 100% honest, accurate and unchanged. But now you have a label to put on them if you like. Thank you for never needing it before, and I hope even though I have written this post, it really doesn’t matter now. <3 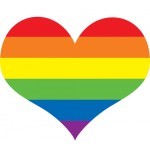