The World After Paris: It’s Time To Stop Lashing Out And To Start Being Brave

It’s still hard for me to fathom what happened in Paris last Friday. I think of all of the people who lost their lives and their loved ones that are still here, grieving them. I think of the fear that is going around. I turn and see it everywhere. And I think that it’s incredibly sad that this is the world we live in. One ruled by fear and violence. Terrorism is called terrorism because that’s the point of it – to invoke terror.

Since the Paris attacks, a lot of people have said a lot of things that show up on my social media feeds – angry things about how people (Americans) care more for France than they do Lebanon, which was attacked the day before Paris was. A lot of people are asking why we don’t react the same to Israel or other countries where this is a much more common occurrence. People are angry, hurt, some offended, and many are pointing fingers.

I am lucky that I have a lot of friends who are “good people”. Friends that are doing less finger pointing and more like, “Why is the case?” I didn’t have to do a lot of soul searching for why I was affected by France more than I was by Lebanon. My reason – sheer ignorance. I admit that I don’t watch world news or am always in the loop. In fact my loop is usually days behind (or worse). It’s not really intentional or anything – it’s just the way it is. I don’t like watching the news, and I am so busy all of the time, and usually behind on something that I usually get my news from Facebook or my husband when he comes home from work. Had I known about Lebanon I would have been just as affected. But I didn’t. Just like I know I don’t know about the daily violence and terrorist attacks in Israel, Syria and other countries.

Some of my friends shared an article about “emotional proximity” that I thought was really on point. It essentially talks about why many Americans do feel stronger about the Paris attacks than the attacks in Lebanon and it made a lot of sense. (I encourage you to give it a read, but essentially a majority of Americans have a greater personal stake/connection to France than they do Lebanon.) Whether it’s ignorance or a case of personal connection or lack thereof, I don’t think people should lash out at others for talking about their sadness over the Paris attacks, just because they don’t mention every other country that was recently attacked. Because the sad thing is, that list is long. The world hurts… everywhere. 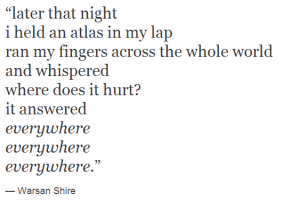 For me, it’s all about the senseless loss of life. I think about those who have died in these attacks that have gone on for over a decade (much longer than even I’m aware of, I’m sure) and I think about everything the world has missed out on. Maybe we’d have a cure for cancer. Maybe we could restore hearing loss for those who are hard of hearing and/or deaf. I think of all the books we’ll never get to read, art we’ll never experience – about the people who will never be born, because their would-be parents lost their lives before they could even be a thought or wish or dream. I feel like this is what everyone should be thinking about, and then working to stop it. I’m not prioritizing countries because you can’t. A life is a life, and when you cut us open we all bleed the same.

The other thing I can’t help but notice is how the world is different again. Because for whatever reasons the rest of the world is reacting to the Paris attacks much more than any other incident in any other place since 9/11.

Some people blamed the refugees for what happened in Paris and suddenly states across this country were stating they were formally barring refugees for settling in their states (twenty-four so far, you can read about it here and see the complete list here). What I don’t understand is what people are thinking when they do things like this. All right, that’s a lie. I understand that they’re not thinking. They’re afraid. But here’s the thing about terrorism – if you live your life out of the fear they instilled in their actions – they win. That’s the only way that they win.

So, I’m going to confess something here and now. I’m scared too. I’m scared when I travel, particularly abroad. I’m scared my plane will be shot out of the sky by a missile. I’m scared to go to the movies in a theatre (the Aurora theater shooting three years ago was only thirty minutes away from my home). I’m scared that some crazed gunman will find me in a coffee shop or restaurant or any other business I happen to go to. And don’t even get me started on suicide bombers. I’ve always wanted to go to France, and now if I ever do, I’ll think back to these attacks and feel cold, stinky and very REAL fear. And I feel it, acknowledge it, and I do what I was going to do anyway. I travel. I go out. I am not a shut-in. Because if I stop doing these things I am living in fear, and living in fear is actually not living at all.

I understand that different states and governments are hesitant because they think that ISIS attacked them because they accepted Syrian refugees. Well, I’m sure it didn’t help matters any, but since when do extremist groups need a reason to blow something up? I mean, really. Yes, if countries and states accept refugees they may end up on ISIS’s radar, but who is to say they weren’t there already? Yes, there may be more risk than the day before they accepted the refugees, that’s not a certainty, there is no real way to know one way to another. But there is one thing that is certain: Accepting the refugees is the right thing to do. The human thing to do and we cannot live in fear.

When I see politicians make statements blaming refugees or attempting to keep them out of this country or their respective states, I just want to yell, “But that’s exactly what ISIS wants!” because it is. It was just like when people were blaming the refugees themselves for the attacks on Paris and I wanted to yell, “What do you think they’re running from?” But I’m not yelling, because it’s not the time to yell. It’s time to be human. It’s time to embrace. It’s time to love, and love so fiercely that that light can combat the dark. It’s time to think. It’s time to reflect. It is not the time to close doors or turn fellow humans away.

And now is the time for people to start making their choice.