The Story Of An Angel

My dog, Angel, is very special to me, much more than a pet and even more than ‘a part of the family’. I have always been a dog person and yet my bond with her goes beyond any other bond I have ever experienced with another animal. This is her story, and the story of us…

Angel will be six years old next month (April 28) and has been by my side for most of those six years. The first time my VP shunt broke while living in Colorado, I felt something had to be wrong and knew in my heart of hearts it was my shunt, but unlike roughly 98% of my shunt malfunctions I was not critical after only an hour. In fact my symptoms seemed to go up and down, though never away. When my husband contacted my surgeon I told him not to tell him one of the main reasons I thought my shunt was broken.

“Angel has been following me all day and keeps whining and looking at me funny. I know it sounds crazy, but I swear she thinks something is wrong.”

It was true, she kept vigil over me and wouldn’t even let me go to the bathroom without her (not like her at all). Three days later I was in surgery and when I returned she kept her vigil again, only this time seemed at ease, just cautious and attentive. She has been through my autoimmune disease ordeal, two shunt surgeries and I know there will be more medical issues in the future. When she acts like something is wrong, something is and I have learned to listen. It is as if she can sense the change in my brain, much like I imagine dogs that can detect seizures do, and knows when I am in trouble. It reminds me of when I first found her and the roles were reversed.

Angel’s litter was abandoned when she and her two brothers were less than a week old. When my boyfriend at the time, Joe, and I found them, we both wanted a dog, but it was not in the cards. Money was beyond tight and I knew that training and taking care of a dog would fall 100% on me, since Joe could not even take care of himself. When we found the litter, we took them in and provided for them while posting ads and making contacts with local shelters that could take them in.

Shelters were a dead end. All of the no-kill shelters were at capacity and special organizations and shelters were reserved for special breeds and these were clearly mutts, not deemed special enough to be placed with those well-intentioned groups. I refused to consider any shelter or organization that could not guarantee the dogs would be well cared for until they were adopted or fostered by loving homes. Until then I would skip a meal or do whatever it took to provide for them. One of the boys (Angel was the only female) was quickly adopted by a friend of a friend. I knew they desperately wanted a dog and were a stable couple who could provide for one. That was all I needed and it was farewell to that litter mate pretty much right away. Angel and her remaining brother, however, would stay with us for the time being.

That first night of having those two in our home made my heart swell. They were smaller than the size of my (already small) fist, their eyes sealed shut and they were unable to walk (again they were very YOUNG). I knew that it was important to find a supplement for their mother’s milk, which they should have still been getting so I posted desperate ads on craigslist and other pet forums asking for advice and what to do as the next best thing. We met a reputable breeder who was very helpful and donated all of the supplies we would need for the next three to four weeks, including milk replacement and instructions with every kind of scenario possible. (For the planner in me, I actually felt secure after everything, which means it really did cover every potential ‘what if’ that there was.)

Joe and I bottle fed them. I moved them to do their business because they could not yet walk and needed help and we kept vigilant watch over them while trying not to get attached. After all, as much as we wanted them, dogs would not work in our lives at that point in time. Then, a little after a week of nursing them, I was holding Angel (not yet named) who was the runt of the litter, bottle feeding her and she opened her eyes for the first time. When she did I swore she gave me a look of recognition and love and a feeling unlike anything I had ever felt up to that point washed over me. I knew then, I wouldn’t be able to let her go. 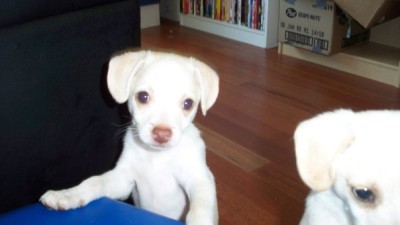 Weeks went by and both dogs were doing incredibly well. It came time to train them and go in to see the vet for their first exam and round of immunizations. By then I told the vet I suspected their parentage was Chihuahua and some kind of terrier, my instincts told me a Jack Russell. Both dogs had light spotting on their legs and now that they were around five to six weeks old, were able to jump high for their size without a running start. The vet agreed with me and told us based on their age they were born between April 27 and May 4. I chose April 28 as their birthday, mostly because my birthday was on the 28th of July.

Training, bonding and feeding continued, though now they were on solid food 100% (it was a two week transition). When we were considering names for the dogs, I suggested Angel’s name because she was white and blonde (it is almost like a very pale peach color). Her legs and underside were white and the only blonde coloring was on her back, face, ears and tail (as well as those spots I mentioned on her legs). Her back was solid blonde and the only white marking she had on her back was a single boomerang shape over each shoulder blade. Looking down on her, they looked just like an angel’s wings. It was decided. 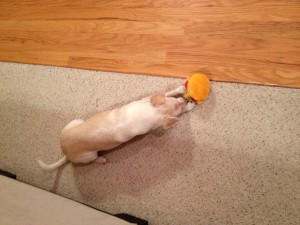 One day when I was in an important meeting and Joe texted me relentlessly. Since I was in the meeting, I could hardly check my phone, but when I did he said something was wrong with Angel, very wrong. As soon as I was off work, we made an emergency appointment with the vet. She had an infection and was given meds for it, but wouldn’t eat or drink. I kept a vigil over her, not sleeping and called into work. When Joe would relieve me for a few minutes I would shed a few tears (I couldn’t do it around her, afraid she would pick up on it), hoping that she would be all right and terrified of what I would do if she wasn’t. She still wouldn’t eat, but after that first night she would drink water from my hand, but only from my hand. A few days later she started eating again and within three weeks made a full recovery.

There have been very few other scares with Angel since and truth be told, after the first few months, she seemed to watch over me in ways I would have never considered. For one thing, she didn’t like Joe. She has never been aggressive but she would never listen to him, ignore him and glare at him (I am completely serious – Joe referred to it as her f**k you face). She acted like he was a nonentity. At the time this confused me until after I left Joe. Joe was cruel in ways I never thought possible and the most toxic man I have ever met. While he was never physically violent towards me, he was hurting me. Angel sensed it and she made sure he knew exactly what she thought of him.

After I moved back to my home state, Angel still with me, she began a new tradition. She would bark her head off and circle me with any new man she met. It took a number of instances of her doing this before I realized she was protecting me. Women she was all right with, but men meant she walked those circles around my legs as if creating a shield between me and the unknown male. It is not just protection that Angel provides…

When I first met my husband Roy, he came to my house to pick me up for our first date; I expected Angel to bark her head off at him and warned Roy as much. I knew she would adjust, just like with any other man, after a few times and thoroughly sniffing him, she was fine and as friendly and outgoing towards him as she was with everyone else. But it would take time, except that it didn’t. For the first time in her life she didn’t bark or act protective of me when she met a man. She stood on her hind legs and tried to lick his face, begging for attention. Angel was absolutely smitten, which should have given me a clue (and I think it did). To this day, Roy is the only guy she has been instantly okay with and she was more than just okay with Roy, she was enthusiastic and joyful around him. (We named the tables at our wedding reception, rather than numbering them and ‘Angel’ was sure enough the name of one of our tables.) 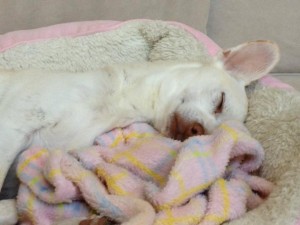 And that is the story of my girl, Angel, and all of the ways she takes care of me: licking my tears off my face if I cry, shielding me from potential threats, letting me know when something medical is amiss and showing me the way to happiness. I know we’re much closer than many other people I know with pets, and I understand why. I was the first thing Angel saw in this world. I nursed her, was there for her first steps, trained her and took care of her when she was sick or in pain. In turn, I received the gift of unconditional love, my first from any other creature on this planet (remember, she was with me before I met my husband). A best friend, a loyal companion, protector and a guide to show me the way, I will always be thankful for her (and hope to figure out how to clone her so she can last as long as I do). She is not my pet. She is not my dog. She is my girl, my (fur) daughter, and I know in her eyes, I am her mom.

The only difficult part of posting this blog was figuring out what photos of Angel to use. Go ahead and judge me, but I have over 9,000 pictures to date. I did mention she is my girl, right? 😉