Trophy Hunting: Like Shooting Fish In A Barrel, Only The Fish Are Lions

Last month something appeared on my newsfeed that made me stop everything. It was a picture of someone smiling big and holding a rifle next to an adult male lion. I wondered how they made it appear so calm, as it was sitting upright, particularly so close to a gun, real or not. And then I saw the message, and then I saw the comments, and then I just wanted to throw up. It was a real lion, not a prop, which I knew right away – the camera that caught it… you could see the mats in its fur… no reproduction could capture its spirit. But its spirit had been snuffed out by a bunch of rich people who thought hunting lions would be cool. And I know these people. And I felt sick again. 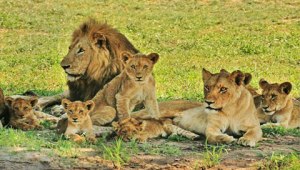 I am not a naïve person, and while I don’t like to think of myself as jaded or negative, I am very realistic about people, the world, how things work… but hunting lions for fun – I seriously didn’t know that still happened. I mean they’re endangered, or at least they should be. There are (maybe!) 30,000 lions left in the wild. That’s it. I feel like I should sing praises about how lions are such majestic, unique and important animals, but why should I? I mean they are, it’s true, and I can’t imagine any person not being upset about them suddenly ceasing to exist, but so are tigers and zebras, or closer to home, so are gray wolves. I love animals, but I eat meat. I understand how things work on a farm, but I could never live that life because of my sensitive stomach when it comes to slaughter. But I don’t judge those who do, I respect them, and I respect the animals. But this is not that. This is not natural or for some purpose such as food. This is a bunch of rich rednecks wanting to feel high and mighty by taking on the king of the jungle. I am angry. I am disgusted. I am ashamed.

So here is the ugly truth behind hunting lions. Yes, you can do it right now, it is legal. You can pay a lot of money in South Africa (and two other participating countries) and have a guide who will take you on a hunt. But make no mistake, if you are a serious hunter or a sportsman – this is not for you. These lions are contained. There is nothing to be proud of when it comes to hunting an animal in a false wilderness (such as private game reserves) and shooting it from afar. It’s an insult. I’m not a hunter… again I just couldn’t – ever. But I grew up in Nebraska, my brothers hunted deer, and so did a lot of my friends. And there are rules when you hunt. Typically females and the young are off limits (unless there is a population issue and then there are still new restrictions on exceptions), and it is one per hunter, etc. But these are just the laws. There is another code that real hunters follow. People who are in it for the sport follow certain principles, because like any competitive discipline, the sport of hunting revolves around integrity. Without the integrity intact, the kill is lame. Wrong. No one cares. It’s not something to brag about.

One such principle is “fair chase” which means that the animal actually has a chance to escape. So a hunting party surrounding a single animal… Nope, not okay. That isn’t even in the realm of fair. And the fact that these hunting programs/companies box in their animals… it really is shooting fish in a barrel.

Stepping back from the whole “this isn’t real hunting” thing because it is rigged and lame and terrible, I want to look at what is actually happening. There aren’t a lot of lions left, and killing males poses a threat that is unique to lions when compared to any other great cat: the pride (the social groups they live in). I love animals, and growing up I was an animal nerd. I lived at the zoo; I had dozens of books about all kinds of animals, each hundreds of pages long. I still am this animal nerd, and while most cats are solitary, lions are not. That’s why the whole “we only shoot after they have contributed to the population” is not faulty logic, because it is grossly misinformed, misleading and incorrect – it is not logical at all. See, when a dominant male of a pride is killed off a new male steps up and the first thing he does is kill the cubs of his predecessor. It’s instinctual. This is not new information. Anyone who knows a thing about lions knows this. So the lions that are being killed… they may have contributed to the population, but their contributions die with them, and the population doesn’t actually get bigger. Then there is the question of how do the “guides” know which males have contributed. They can do age verification after they kill it, but what happens if they shoot one they didn’t mean to shoot. Unless they have the powers of resurrection imbued unto them – they can’t take the mistake back. The lion in question is still dead.

I know I’m focusing on lions – it was the first picture I saw, and I still can’t get the image out of my head. But pictures that followed showed zebras as well. And going to the actual sites where you can “buy” your way into having your very own lion trophy show that it’s not just lions that are being hunted for “sport” that should be considered off limits because the populations are such that they should be protected: zebra, hippos, giraffes, leopards, rhinos, elephants… are you sick yet? Okay some of them are not endangered, but many of their populations have dropped by more than 15% in the last decade and they’re getting to the point where they will be. Why? There are more species you can hunt for kicks, but I’m going to stop there, because I can’t spend too much time on those hunting sites before I want to punch someone.

The people who appeared on my newsfeed… I’ll never look at them the same again. I’ve lost so much respect for them and I am trying to remember that they are not just the safari they went on… they are more. I know it wasn’t their idea, they went along with it… but if it were me, I would have never gone along with it. I would have told them exactly where they could put that idea. The person who wanted to do this in their group (the idea guy or whatever) – all of this friends congratulated him and made jokes about the lions’ last moments. Are they going to put it on the wall, what fine trophies they were… mutual friends however, were with me and most of the comments were “WTF!” In fact, that was one of the tamest comments as most of the others resorted to name calling. I didn’t comment, because for once there were no words for how I felt. It’s truly an achievement when I am so angry or disgusted that I’m just done, speechless. Seriously, ask my husband – it is RARE.

So, I tried to get through this post without calling anyone names. And I can keep all of the profanity at bay… but I guess now that I’m at the end I do have to say something. Most of the people going on these safaris are rich Americans, but those who are not used to their wealth. They’re “new money” who like flash and extravagance, but lack class and sense. And how they hunt these animals is not something to be proud of – there is no sport in it. They are cowards and I seriously question their intelligence and compassion. But that is a personal attack. It’s a rant. It’s a judgment, but hey I’m human and I just had to say it as calmly as I could.

I stick by the “coward” statement though, and I don’t think that’s judgey or an attack. Those are the facts. If they want to really hunt for trophies then they would leave the guns at home. I’d like to see one of these rich guys take on a lion, stalk it, respect it, and go in for the kill with nothing but a sharp blade. Because that would be fair… but they won’t because they’ll end up the trophies that the lions parade around. Some people might see this view as harsh, but I see it as natural selection.

0 Responses to Trophy Hunting: Like Shooting Fish In A Barrel, Only The Fish Are Lions