Will The Real Caitlyn Jenner Please Shut Up

When Bruce (referring to who she was prior) announced that he was transgender and beginning to make the transition, I didn’t blink. I think a lot of people thought this was just another Kardashian ploy for attention, but I didn’t. I believed him. I took my cues from him and changed my pronouns when he did. When Bruce became Caitlyn, he became she and it didn’t faze me one bit. I didn’t have problems accepting her as a part of our community, and I never tripped over my pronouns. She was welcome at our table and I felt happy for her – that she could finally feel comfortable in her own skin, and proud of her because I’m sure that being a famous male athlete posed unique challenges when it came to announcing who she really was and beginning the journey of having her outside match her inside. I’m not trans, but I’m gay, and I have a lot of trans friends. I can’t understand what she is going through personally, but I can empathize and accept her. And I do.

I accept Caitlyn Jenner as a woman. I accept Caitlyn Jenner as a part of the LGBTQ community. But my acceptance pretty much stops there. I am tired of Caitlyn speaking for women, when she has been one for such a small amount of time (while she has always been Caitlyn on the inside, she has not been living as a woman for that long and has enjoyed male privilege until she came out) and her speaking for trans people and the LGBT community as a whole… shut the fuck up already! 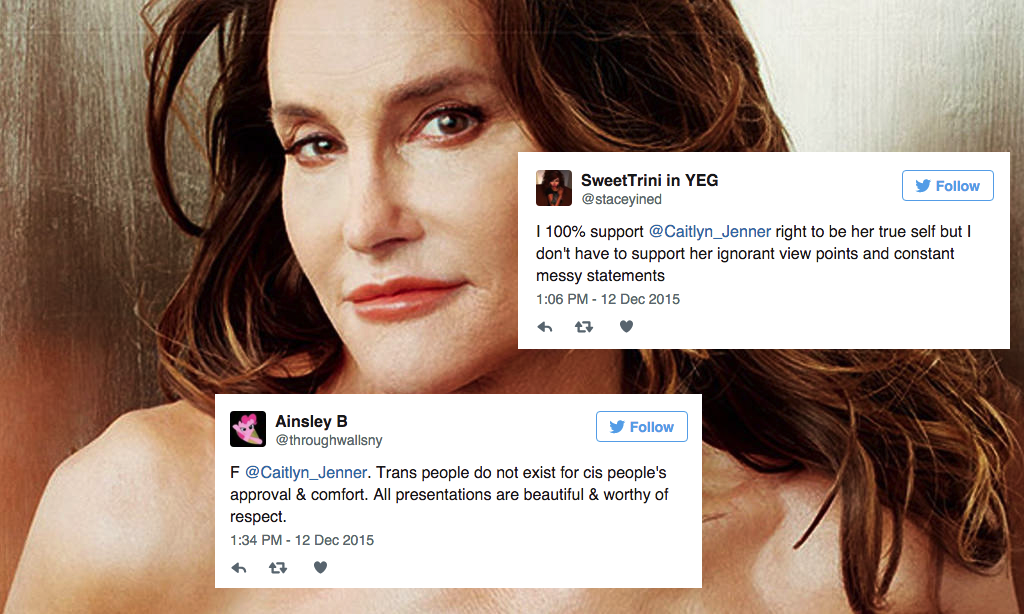 I’m not alone in my frustrations over statements she has made the past few months, or views she has shared. After being awarded as one of Glamour magazine’s “Women of the Year” she talked about how the hardest part of being a woman is deciding what to wear… and she wasn’t joking! I am not a woman, so I can’t speak for women, nor would I try, but I am a feminist, and I am bigendered (I embrace both masculine and feminine aspects of my person, and consider myself both) so I don’t exactly enjoy male privilege either. I was a Women’s Studies major (one of three majors, the first guy to ever major in that, so they later changed it to “Women and Gender Studies”) and I am a person who can try to understand and empathize. What about all of the double standards women face? What about the pay gap? What about body image and objectification and rape? I mean she has daughters for Christ sakes. When her daughters go out at night, which is scarier: that they may be assaulted or that their fashions might be last season? It is absolutely absurd.

But Jenner hasn’t just missed the mark on what it means to be a woman – she has repeatedly made statements that make it clear that she judges gay people and even other fellow trans people. Like her interview with Ellen DeGeneres, she admitted to not initially being on board with same-sex marriage, saying she was a traditionalist. That’s fine, but when Ellen prodded about whether Jenner’s views had changed, it was clear she still wasn’t 100% for it. It was more like, “Well, I don’t want to make waves so whatever”. But that’s not the same thing. Then she made a comment about how trans people should be aware of their presentation because, “If you look like a man in a dress, it makes people uncomfortable”. So? 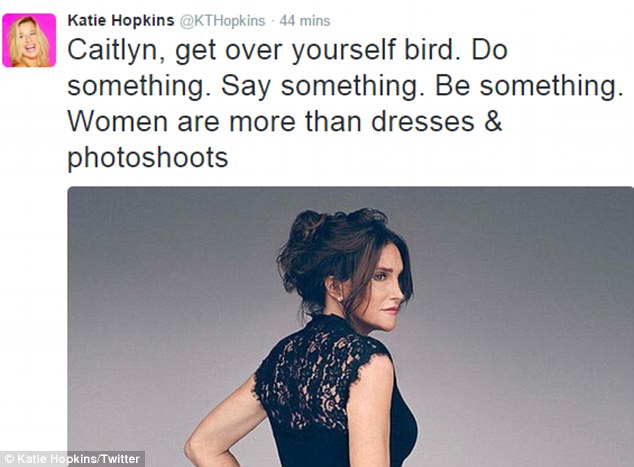 Trans people are bullied, killed, discriminated against and often feel uncomfortable in their own skin, as if their insides don’t match the outside (pre-op obviously, but note that not all transgender people want or can afford sexual reassignment surgery), but I guess they should worry about what everyone else thinks about them, based on their physical appearances. Again, shut up!

I understand that the media and some of the trans community may be expecting Jenner to be a role model and advocate for the community. I understand Jenner did not ask for this, but her level of celebrity is bringing such exposure it is a natural reaction. But the media needs to understand that Jenner is still learning what it means to be a woman, and a part of the LGBTQ community, and they need to back off. And Jenner needs to just say no. Because her life experiences are going to mean she is going to need one hell of a learning curve.

Less than a year ago, Jenner was still Bruce, and Bruce despite his inner struggle had never experienced anything but a life of privilege. He was a rich white man who had fame of being a famous athlete, the epitome of masculinity. People put him on a pedestal and wanted to be with him or be like him. This was Bruce’s life and Caitlyn was Bruce for 65 years… that’s a lot of time and experiences that Caitlyn remembers, so it’s only logical it will take time for her to shed her male privilege completely. She has been living in a bubble and the bubble is still partially intact. She won’t pop it until she’s ready. And that’s okay, but what she does in the meantime is important, and matters. 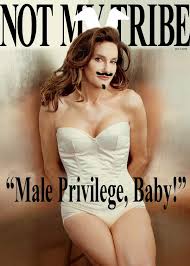 I’m not one of those who expect her to be perfect, or get it right away, but I do expect her to shut up and stop speaking for the community as a whole, the community I belong to, when she does not represent us. She may be one of us, but she is ignorant in what it means to be LGBTQ, or a woman. She is still learning. She can speak for her own experience. But she can’t speak for mine. And she shouldn’t speak for others.

I don’t think Caitlyn means do the make the missteps that she does and say the hurtful things that demean women, or are homophobic and transphobic, but I think she just needs to think longer and harder before she speaks at all. It’s all right that she doesn’t get it yet, and she does not need to hold our community up and her celebrity does not mean she needs to accept the mantle of role model just because. She can do a lot of good when she chooses to, if she chooses to, when she’s ready. But doing so before… it can lead to this.

In the meantime, I just wish Caitlyn would get to know herself beyond her presentation. I wish she could accept that she is still ignorant (as in lacking knowledge, not a bigot) and it will take time to get past that ignorance. And until she does, she should watch what she says and make sure to state every time that this is her experience. And hers alone.

Tell everyone your story. Shout it. Sing it. Write it. Tell everyone who wants to listen, and even those who don’t. But keep it about your story. When it comes to the rest of us, please shut up.