Today, my baby girl turns eight. EIGHT. How did we get to this point? Where did the time go? She is now considered a senior… She’s 48 years old in people years… Yes, she is a dog. I am that person. But she is my BABY.

I have written about my dog, Angel, before. I named her “Angel” because she had white markings that looked like wings on her front shoulder blades – symmetrical and everything. They’re harder to see as she has aged (her apricot color on her back is fading and getting lighter, but if you look hard, you can still make it out. She was rescued from the streets. I cared for her before she could move, before she opened her eyes. When she did… there I was. I bottle fed her. I’ve been her “mama” but even more, I was the first thing she saw. And she was always my anchor. 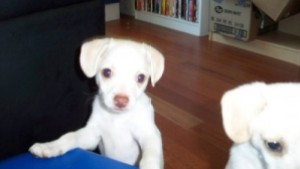 In 2009, when she was just a teenager (in human years) I died. Like actual death. Obviously it didn’t take, but for the next twelve months I was in and out of hospitals and Angel stayed with friends when I was unable to care for her. Whenever she would see me, she went crazy, wagging her tail so hard her butt swayed to and fro. She would wine and paw at my central line. She knew I was hurt and wanted to make it better.

She made a world of difference to me and my healing. I had a wonderful support system of friends, but she was my constant companion. The one who could always make me smile. The one that gave me purpose. I was able to return the favor a few years later when my then-boyfriend-now-husband and I bought a house, with a yard!

Angel isn’t spoiled, but I treat her body like a temple (much more than mine) so no people food, and I give her treats, but never in excess. Her life is full of walks and dog parks and puppy play dates. She has a yard she loves and four years ago we got a cat, who is her constant companion. (Angel loves everyone and everything, and she grew up with my roommates having cats. The cat loves Angel, even though she likes to pretend she is indifferent, it’s pretty transparent. 😛 )

I still can’t believe it’s been eight years… I can’t believe my girl, who still has the crazy energy of a puppy, is considered a “senior” (according to pet websites and such). My brain that seems to cover hundreds of thoughts per minute, also realizes that it’s possible that she’s at the halfway mark in her life. But I’m not going to think about that because it will just make me incredibly sad, or try to come up with a harebrained scheme to clone her so that when she’s gone, I won’t have to let go of her, or some other version of her, completely. (Seriously, my brain goes there, I’m sure I’m demented and need help.)

So, what’s on the agenda for my baby’s birthday?

Well, we’re going to have a party for her. (Did I not already make it clear that I am that person?) Our really good friends have two dogs that she is besties with (they’re often over here or she’s often over there, they’re like this little pack – so cute) and there is a great fresh dog bakery nearby. So we have cake (well the dogs have cake, the humans have dinner) and just hang out and watch the dogs demolish their goodies.

I’m hoping the weather is nice this weekend so we can take her to the dog park and for a few walks (she hates anything cold and wet, we have to force her to go out most of the time during the winter). We also ordered her these organic pizza-flavored dog treats because she loves pizza. Like it might be her favorite food. (She’s never actually had pizza, but she used to go ballistic for these old pizza-treats that have since been discontinued and she begs the most when we’re eating pizza.)

And we definitely owe her a gift. I want to get her a new bed, but we haven’t found one we liked or thought she would like. This has been on our “list” of things to do/take care of, since her last birthday! So we’ll see. She deserves one, though she loves her old one so much… I wonder if she would even use it. 😛

Happy Birthday, my Angel! Your mama loves you!!!