What Did You Do On May Day? Mine Involved Stake-Outs And Going Under Cover

Yesterday was May Day. When I was little I used to make May baskets for the neighbors (or at least the ones I knew and liked) and waited until they were home. Then I left the basket on their doorstep, rang the bell, ran and hid. I was never caught and I can’t remember what I believed at the time, just that being caught was very, very bad. The baskets themselves were full of goodies. Thoughtful small things and candy mostly (seriously, is there ever a time when giving candy is wrong – I just love the excuse). I intend to continue this tradition when we have kids, but didn’t think of doing anything because it is one thing to have such traditions and start them before we have kids and it is just us, but involving the neighbors seemed iffy because I know a lot of people don’t do anything on May Day and they don’t feel a genetic tug to put up with our cheesiness (or my cheesiness, because my husband is just a good sport).

Then I considered what to blog about today, and while I was feeling a writing blog (don’t worry it is coming in a few days) I kept circling back to this. Because who wants to do a May Day blog several days late? The day after, sure, but four or five days later feels like I missed the bus or something. As I started writing this, I decided, “Why not?” I mean, so my neighbors may think I am corny or oddly perky or gay (in the happy way people) – since when have I cared what people think? And I love our neighbors. We don’t live in a subdivision where we don’t know people or dislike people or in an apartment that feels claustrophobic so why would you want to get any closer to your neighbors (after being an apartment person, and a dorm person before that, for years, I get it) – we like our neighbors. We email each other, friend each other on Facebook, lend each other things and bake stuff or give each other candy and miscellaneous tokens of affection, just because. When we first moved here, we had a welcome wagon and have since jumped on that wagon for people who have moved in since. Our neighbors are awesome.

So, I immediately begin plotting what to put in each basket, from Sriracha sauce to chocolates and other goodies. Of course, I decided this a little after 2:00pm and my husband wouldn’t be home until 4:30 to 5:00. This mattered because he had the car to get said supplies. Then I wondered how we were going to deliver the baskets unseen when we are talking about the neighbors next to us and across from us. Eek! (And you know I intended to make a basket for us, to throw off suspicion – I’m not new at being sneaky.) I continued to plot and plan, but then remembered that Roy (my husband) had a business meeting at 7:00pm, which meant we had less than two hours to purchase baskets and supplies, throw them together, and deliver them unseen in a two-hour time frame (and actually with Roy’s commute, it was more like a 90-minute time frame, because his meeting took place 30 minutes north of home).

I may be a planner, but time and I don’t typically click (anyone else have this problem?) so I started thinking what my ‘Plan B’ might be. Ideally, when we have kids we would do them for all of the neighbors (not happening this year, I narrowed it down to the three or four we are closest to) and the kids would make them (with our help of course) and fill said baskets with goodies, including a card (and possibly artwork from the kiddies 😉 ) saying “Happy May Day!” Goodies would include the usual candy, but also thoughtful things individual for each person and of course flowers. After all, this is May Day, not just another excuse to buy candy (at least not entirely). Then I would accompany the kids (stealthily I hope) and have them drop off the baskets, ring the doorbell and hide. The goal is not to get caught. It is just anonymous cheer being sent out. 🙂

The reality was my husband returned home, I broke the news to him (he wasn’t thrilled, but boy was he a good sport) and we went to the grocery store for the goodies and the craft store for the baskets and cards. This took just over an hour, so Roy had twenty minutes to get ready while I arranged the baskets. They included violas (in a planting pod), treats for their respective pets (two of the houses have dogs, the third a cat), Dove chocolate caramels, Starburst fruit candy, a card and one basket also received a bottle of Sriracha sauce because their daughter loves spicy food (as do I – I have an entire shelf in our pantry dedicated to hot sauces, chili pastes, spices, etc. there is no such thing as too much spice). Roy wrote “Happy May Day” on the cards and I took a few pictures before it was time to make the deliveries. (I must say again Roy hung in there. He was exhausted and just replied with his version of that ‘happy wife, happy life’ statement, which I don’t love because that is like saying “yes, dear” in that tone. And if you don’t know what that tone is, wait until you’re married. But it could be worse and he could not put up with my antics, so for that I am grateful.) Roy had to go, so I staked out my neighbors’ houses. (Oh yeah, if they caught me imagine how I would rate on the creep-o-meter.) I had two neighbors across the street (houses, not people) and one next to use (the other house is for sale). 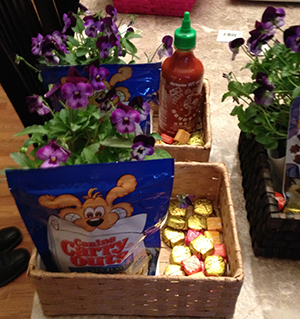 One of the neighbors across the street was doing yard work. I was foiled until around 7:00, which was making me nervous because all three neighbors have kids, some of them young enough to possibly have an 8:00 bedtime (it is a school night after all). He finally went inside and shut his garage door. I hid all of the baskets on my porch, and went for his house first. SUCCESS! I didn’t ring the bell though – I had other neighbors to deliver to. Next were my other neighbors across the street. I staked out the neighborhood and made a mad dash for it, careful not to upset the flowers in the basket. As I made my way back, their garage door opened! I made a run for it and made it in the house by the time it was up. They didn’t see me because it was their turn to be outside with the garage open and they didn’t notice the basket. I waited them out, with only the house next to us left. Finally, I was in the clear, I crept alongside my house, our property perimeter and then dashed around their car in the driveway and left the basket there, without ringing the bell. Why? Because the neighbor who was just out, opened his garage again! I ran to my yard (not sure I completely made it) and then pretended to inspect my trees. (Yep, there were no flowers around, and I had to do something.)

I was happy. I made all of the drops without my partner-in-crime to assist. Fifteen minutes later I went outside ‘on my phone’ and faked a conversation as I walked to see who had found their baskets. Only the neighbor who kept opening his garage had (I actually enjoyed the discovery from my window) but the neighbor next door had not. They were my target because they had younger kids than the third neighbor and I didn’t want to ring the bell too late. So, I walked back and forth ‘on my phone’ a few times to make sure the garage wouldn’t open across the street (I was kind of counting on it). When the coast seemed very clear, I went for the house, rang the bell and took off for my yard. As soon as I crossed our perimeter, sure enough the garage I was counting on opened again! (I think they were trying to give me a workout). In theory, I was not caught. I then showered and decided to wait to make a final sweep when I got out. With my hair still wet and ‘on my phone’ again, I made sure all three baskets had been discovered (and they were – no more bell-ringing incidents). I was happy and obviously way too into this May Day thing than I probably should be. 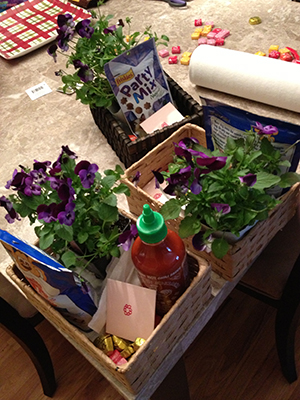 You’re never too old to be sneaky and, well, I love being sneaky. I am pretty sure at least two of my neighbors suspect it was me, one because they kept opening the garage and probably catching glimpses of me running away from the only neighbor who I don’t think would suspect (before talking to the other two at least) and the other neighbor because as Roy says, “that is such a ‘you’ thing to do.” Of course, if approached I will deny, deny, deny. For once I am not mentioning my blog on my Facebook page, (again neighbors are friends and I just don’t trust those privacy settings) but if one should come across this blog post (in case they see past or future Facebook statuses) I would just like to say one thing. I heard nothing. I saw nothing. I definitely know nothing. Someone obviously hacked into my account and wrote this post. (Shaggy’s “It Wasn’t Me” just popped into my head as I said this – shudders.)

Happy May Day everyone! Here is to warmth (I am not a cold climate person, so over this winter) and lots of pretty flowers! (And chocolate, remember this is one more excuse to go out and buy some chocolate.)  😉