When Your Cat Eats A Big Fat Ribbon

I love our cat Moxy, even though I am not a cat person (Becoming A Cat Person (Or Trying My Best to Be)) I am an animal person, and she is a member of this family. I mean, we’re way more alike than me and our dog Angel – even though Angel is my favorite. (Hey, I rescued Angel from the streets and bottle fed her – I was the first thing she saw when she opened her eyes when she was just a few days old – she’ll always be my favorite.) But I digress. Our cat is a little special. And by a little, I mean she is very flipping special.

She walks on the upstairs railing like it is a balance beam when there is hardly room for a single paw and often falls as a result (sixteen feet onto a hardwood floor). She sticks her front paws into certain outlets (yes, she actually sticks her paws into outlets, which is very different than just chewing on cords) and she eats everything she thinks she can get away with including large plastic balls. She’s affectionate and loving and vocal and like all cats she likes to test limits, but even the greatest cat lovers (that I am friends with) admit, she’s missing something upstairs.

One thing she has never ingested however is string, ribbon, or anything that could be considered similar to this. We often play tug of war or “Catch the ribbon” and it’s a lot of fun that never goes to a not-so-great place. Well Moxy has decided those innocent days are over.

I was playing with a big fat ribbon I had used to wrap something that went with my anniversary gift to Roy. She caught one end with her paws and it just tickled her mouth, which is the usual and then all of a sudden with one giant slurp I lost hold of the ribbon as it started to disappear into Moxy’s mouth. I panicked and reacted quickly. “Roy!” I yelled to my husband while advancing on Moxy. “She’s eating the ribbon!” My husband didn’t really react, absorbed in whatever he was reading on his laptop. So, I hissed at Moxy since usually this makes her freeze and drop whatever is in her mouth, if something is in her mouth.

Sssllluuurrrppp! The ribbon that was at least twelve inches long (and more than an inch wide) had nearly completely disappeared at this point. And now Moxy jumped off the couch, fearing trouble and bolted upstairs. I bolted after her, my husband did not move, but I think at this point he looked up. I found her in the corner of the room she sleeps in. She was staring at me in a grand face off. I know my kitty-loving friends say you can’t train a cat, and while she is no “Meet the Parents” toilet-using cat, Moxy knows who the alpha kitty is, and while cats are not pack animals, anyone who has multiple cats knows there is an alpha kitty – the one cat the other cats don’t ever try to cross, but also go to for protection, love, their shares of the food, etc. I am that kitty. Anyway, Moxy is staring at me, and I am staring back, and that is when I realize the ribbon was gone!

I looked all over her room, in the hall, on the stairs, back downstairs in the hall and the room we were in, and nothing. I realized she must have ate it, swallowed it, whatever. The ribbon no longer existed in the outside world, but within the confines of our incredibly tiny 8-pound cat (she is just incredibly small and was a runt according to our vet, we feed her the maximum recommended so she is hardly starved). I told Roy, “I think Moxy ate that ribbon.”

He looked up at me and said, “No she didn’t, it’s somewhere.” This coming from the guy who also said Moxy would never fall off the second floor because of self-preservation instincts, after I talked to him about covering the railing or doing something to prevent it. He held his position until she did fall and landed less than a foot from where he was standing one day. I wonder who knows her better… 😛

I made Roy get up and we hunted for the ribbon together with no luck. Finally, Roy admitted that Moxy did eat the ribbon. Now what?

I wasn’t going to panic, because I really thought she would just throw it up within an hour or two, just like she did whenever she ate a toy or something she shouldn’t. We left her in the room she sleeps in and closed the door, to contain our vomit hunt later, but one of us checked on her at least once an hour until it was time for bed. Almost four hours had passed and it was getting harder for me not to completely worry. Why hadn’t she thrown it up yet?

Roy said it would probably come out the other end and be waiting for us in the morning, and it wasn’t too late for her to throw it up, but I couldn’t get over the size of the ribbon, which was both long and fat for any cat to ingest, but when we have a cat that is so small as an adult that if she was a person she would probably be a little person (I’m being politically correct, not redundant) it makes me worry that much more. I don’t even know how such a long and fat ribbon can be stored in such a tiny creature.

The next morning there was no ribbon waiting for us. Not on the floor in a pile of vomit and not in the litter box. Roy called the vet because I knew enough to know that a ribbon like that could cause serious issues in Moxy’s insides. But she was acting normally, hungry and had still not thrown up anything. But she hadn’t pooped either. The vet said to give it until Monday (it was Thursday) to see if she would pass it on her own. This was of course assuming she was still acting normal, being active, not in any pain and eating/drinking etc.

I agonized the entire time while Moxy played, chased, jumped, lounged, ate and asked for more food as soon as she finished eating nonstop until she was fed again. So, it was business as usual. Friday she pooped and threw up, but no ribbon in either thing. And she wasn’t bothered by the vomit incident; it was like normal hairball stuff after we gave her a treat. On Saturday, Roy went to the vet on his way home from work at my insistence (because after visiting some cat forums, I felt like a kitty murderer for not taking her to an animal hospital the night of the initial ingestion), and they held firm on the Monday thing, but recommended a laxative to give her. We gave it to her that night. It looking like clear gel and tasted like chicken (it said so on the package, we did not taste it obviously) and Moxy certainly approved. She ate it no problem. 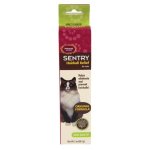 Still nothing that night and nothing the next morning. Finally, I just got down on my knees in front of her and said, “I don’t care if it’s in your box or on the floor, but please show me the ribbon. If I see ribbon when I get back then I’ll give you fish. Like actual fish. But it has to be all of the ribbon, not just part of it. And if I get a choice, I’d prefer it in your box.”

I had no expectations. I mean it’s not like Moxy knows English or anything, but sure enough when we got back there was the entire ribbon, all knotted up (I mean it was insanely knotted, I have no idea how Moxy’s insides did that, and I don’t want to know) in her litter box. The bitch was holding out for the right offer! (I guess she does take after me in some ways. 😛 )

Because I am a person who is true to my word, I tracked down a fish fillet she was able to have (it was made for domesticated cats, just organic fish and water, and a very small portion). Moxy went nuts and we got it all on video!

The great ribbon trials are over, and I don’t let her play with any ribbons anymore because I’m not looking to do a repeat. But if your cat ever swallows a big fat ribbon and your vet tells you not to worry yet (because seriously contact your vet first) get some kitty laxative and be prepared to make them the right offer and you will be rewarded. It’s a disgusting reward, but it means your kitty is fine, which makes the grossness worth it. 😉