Two weeks ago, I surprised (and kidnapped!) my husband with a romantic getaway to Glenwood Springs in Colorado. It was long overdue and something we really needed. We’re complete opposites in everything, which can make a marriage more work than other ones (or so we’re told) but honestly we’re good. It’s everything else: life drama, family drama on either side, work crap, schedules, money, house stuff or something else that pops up just because our lives aren’t colorful enough that can wear us down. It’s hard to escape in each other when real life constantly surrounds us, loudly banging, never letting us forget that it’s there. So we like to take a few days every now and then where we can shut the rest of the world out. It’s just me and him and us, and nothing else exists and nothing else matters.

Glenwood Springs did not disappoint and it was just what we needed. We stayed at the Glenwood Hot Springs Lodge because it included unlimited free access to the hot springs pool. I don’t know if it makes sense next time, knowing how much we actually used the pool, but it was perfect for our first trip and made it so we could just go to the pool for thirty minutes after a long hike without wondering if it was worth the admission. The hotel was beautiful and while I requested a room with a view of the pool, we happened to get the room with the best view, top floor and where the balcony stuck out the farthest. I was really happy about this. 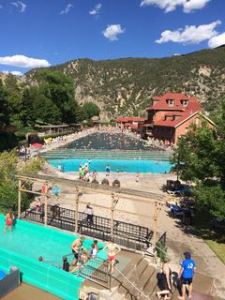 The first day we mostly explored. We didn’t go to the pool, but looked around the different shops downtown, had a nice meal (lunch and dinner) and got some chocolate truffles because I have a serious chocolate problem that I don’t view as a problem. We were in our hotel room the most that day and it was just us, in our own cocoon. It was perfect.

The next morning we had breakfast and then went for a hike but found out that the trail’s parking lot fills up by 7:00 in the morning so we changed plans and went to Glenwood Caverns Adventure Park instead, which we planned to do later. This was a destination I thought we would enjoy because they had some cave tours that looked beautiful and interesting. A major con for me though, was that the only way to get into the park was to ride this gondola up a mountain. For someone with a serious phobia of heights (heights and spiders are the only two things I truly fear; and heights way more than spiders) this was hell. For anyone else I imagine it would be quite beautiful. The park has a lot of thrill rides, which didn’t interest me (I seriously had to get off the kid’s Ferris wheel after only one rotation, but I tried it voluntarily so think I should get credit for that) but Roy rode their Alpine Coaster that I know I would have loved if it wasn’t for the 400 foot climb back to the top.

The caves were beautiful though and well worth the panic attacks. They have two caves at the park that offer tours: King’s Row and the Historic Fairy Caves. Both were beautiful, though I think the Fairy Caves was my favorite of the two. We also tried out the springs that day, did some more exploring, more eating and just took it easy. 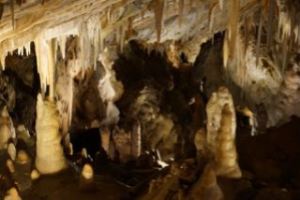 The next day we had a couple’s massage and a Reiki treatment at the Spa of the Rockies. We avoided the springs that day to keep the oils used during the massage on longer. We did a road trail instead. Roy (my husband) specifically didn’t tell me about it because he knew I would say, “Hell no!” It’s a narrow road trail and while it goes both ways, there is only room for a single car on most of the trail. It had a lot of ledges, like you could open the car door and there would be nothing but air, and the road was rough on top of that. If you’re not afraid of heights you’ll love it because the views really are amazing. If you’re afraid of heights however, be sure to take a Xanax or something right before. Also, the road was a lot rougher than even Roy thought it would be – four-wheel drive is definitely recommended! After we hit 10,000 feet there was this beautiful overlook trail that made it all worth it. I even got out of the car and braved the trail so we could take in the views together and watch the sunset. 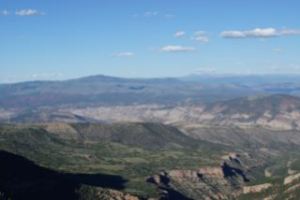 View from one of our driving trips!

The following day was our hiking day and we got up way-too-early to go to Hanging Lake. We arrived at 6:40 and started a hike that while beautiful would be the biggest mistake (for me) on this trip. It’s 1.2 miles (one way) and most of the things we read described it as easy to moderate with no mention of heights other than a 1,100 foot elevation gain, but spread out over the length of the trail didn’t seem all that serious. It is a nightmare for anyone who is afraid of heights and while I almost finished, the last part involved rock climbing of sorts where falling over the side of the mountain would actually be really easy to do. I clung to the side of the mountain where there was more room to let people pass and told Roy to take his time but get a lot of pictures. I’m sad I didn’t get to see it in person, particularly after the rough climb up (I would say it is more difficult than moderate, lots of rocks, and even if you have decent hiking shoes, you really need hiking boots) so I was ready to go. When we got back Roy took a nap and I decompressed by reading. Then Roy wanted to do another driving trail that he swore was not as bad as the one the other day. Well, let’s just say that he told me, “Michael, why don’t you stop me from doing these things? Do you want to get us killed?” while trying to find a place to turn around. At least we can say we had plenty of actual adventures. 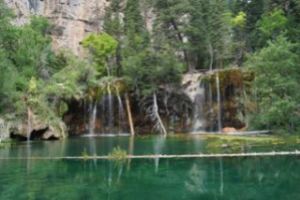 Our last day there we did a little bit of everything. We drove around (nothing that would induce a panic attack though), walked around, explored other parts of the town and found a favorite coffee place. Roy found me a used bookstore that I fell in love with, it’s seriously the best bookstore I have been to in ages and specializes in out-of-print books (yes, it was seriously Heaven) and then we went to a train museum for Roy. We snacked, went to a nearby town to check out a driving trail, had dinner, and got gifts for our friends (and my coconspirators in Roy’s abduction). I also took Roy to the train station (I had figured out when a train was coming in, not a passenger train or one that stopped, just one that was passing through) and got down on one knee and dished out a new version of a proposal and vows that started with, “Roy, you married a crazy bitch…” Because he did. 😛 It was really romantic and I had a chance to propose to Roy this time, or give him an out depending on how you look at it. 😉 It was right out of a chick flick that Roy refuses to watch.

And then we went home.

It was a really great trip, one that was without schedules or expectations, where the two of us could just be together. Though when we got back (and on the way home) I did nothing but sleep. While the trip was romantic and sweet and all kinds of wonderful it was not all that relaxing for me like it was for Roy. Too many heights-induced panic attacks and meltdowns that made my adrenaline a constant friend. So, maybe next time we can put some of these “adventures” on hold and do something else instead, so the trip can not only be romantic and wonderful and needed, but also relaxing and peaceful. At least, Roy was surprised and had a great time. That was always the point for me! 😍

0 Responses to A Hot Springs Getaway!