DVD Subtitles: Why Is It So Hard?

Living life as a deaf person can be difficult, particularly when I was not born deaf, and when I’m not 100% deaf. I’m what’s called profoundly deaf, in a nutshell I am truly 100% deaf to a large percentage of different pitches (more than 50%) and the pitches I am able to hear have to be at least 140 decibels for the sound to even register with me – that’s the same volume as a jet engine! The truth is, a small plane could fly over my head and I would not hear it. So, I am deaf, but since I still pick up pieces of sound, not completely.

I’ve always had hearing loss or been hard of hearing, but it was never crippling. In school, I always asked to sit in the front even though I had perfect eyesight. I always had music and things on maximum volumes and when having a conversation I needed a person to maintain eye contact. Even though all of this was the case as far back as I can remember, hearing loss never occurred to me. It never occurred to me that I needed people to look at me because I was actually reading their lips, something I instinctively picked up and taught myself how to do. And that’s why I wanted to be in the front of a class etc. My parents just assumed I didn’t listen. I’m not sure why, because my family has a brittle bone disease that also causes severe hearing loss. And I have this disease, as does my mother and my brother. My mother is also hard-of-hearing, so why didn’t anyone ever think of following up? That’s a whole other story for another time. But the point is, no one ever questioned my hearing, and I never had a hearing test done.

Then when I was 24 I had a skull fracture after a new medication I was on caused my blood vessels to dilate while I was in the shower, I passed out and hit the back of my head on the bath faucet (I also broke my collarbone in the fall – I’m kind of an overachiever). This seemed to cause my hearing that was already terrible to plummet quickly. Every year, I can understand less and less, even while reading lips. I can no longer listen to music, which I miss desperately, and I am making the adjustment of being completely deaf, full time.

Part of that includes the necessity of closed captioning. Even eighteen months ago, I was an older person who does not want to admit they need glasses or hearing aids. I fought it for as long as I could, pausing a program every two minutes to ask my husband what was just said. That can get annoying in a forty-minute program. For the last year, I’ve relied on captions because I don’t have a choice in the matter. I can watch and enjoy something with captions or try to watch something and have to pause every sixty seconds, which becomes very frustrating, very quickly, and makes watching whatever I am a chore. I’ve come to appreciate subtitles/captions and I don’t even try watching something without them anymore.

So, I get a little frustrated when DVDs don’t offer captions, because it seems like it should be something that is standard by now. I mean not having captions prevents an entire population/community from being able to experience the movie or TV show. It’s one thing to have DVD that almost comes from a garage studio, where is has no options whatsoever, you put it in and it just plays – not have captions. Or another thing for a DVD from a large studio to have captions available for the main program, but not on their bonus features. Do I think they still should – of course! Do, I think it should be more or less simple – yeah. But lacking the specific expertise, I’m okay with the bare-minimum. But what really gets me every time is when a large studio puts out a movie or TV show, loads it with bonus features and language choices and doesn’t have any captioning options at all. What the hell is that?

Now I’m not one to complain for the sake of complaining or knowingly engage in something I know will bother me. I don’t have time to take on some cause, so while this may sound just a little too rational, I make sure something has captions before I buy or rent it. If I want to see something that doesn’t it sucks, but I can’t change it, and there are many things out there that do offer captions. So, I just move on.

This has worked out well until recently when I have experienced a new low when it comes to DVDs and captions. Movies and TV shows from big studios, loaded with special features and/or language options, which specifically state on the box and in their product description that they have captions available – and they don’t! When it happened to me the first time (with the movie The Scribbler) I thought perhaps I was having a blonde moment. There had to be captions, it said so on the box! But nothing. My husband tried – still nothing. We took it back to the store, and the guy didn’t believe us. He wanted to pop it in and see for himself. 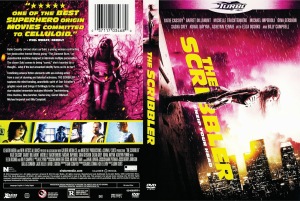 “Please, because if you can figure out how to get the captions working, I want to keep the movie.” I said.

Fifteen minutes of trying, and nothing. There is no option, no hidden backdoor to get to that option. We even checked another disc to see if that particular disc was faulty, but it was the same story. It sucks, and I still haven’t seen the film.

It happened again last week with a TV show: The Royals – Season One. Again, the product description on Amazon clearly stated the DVD has closed-captioning*, but I actually got it on Netflix (but I check on Amazon to make sure everything in my Queue has captions). I was shocked and so disappointed. I wanted to watch the show, and only caught the pilot on TV (which because of my DVR has captions) and it was fabulous. I thought it was The Scribbler all over again, and was just a little miffed.

But my husband, ever-the-optimist suggested that if we purchased it from somewhere, maybe it would turn out differently. As if Netflix had some special “for-rent” discs that did not come with the perks of a purchased disc. Yes there are “Rental” discs, but they state on the disc (Rental Only) which if you’ve ever used a Redbox, you’ve probably seen at least once. And while those discs do not have the special features that are on the for-purchase versions, they still have the language and captioning options because again – talk about basic! But I wanted to be wrong and my husband to be right, so we tried it. He stopped at Best Buy on the way home from work and bought the first season of the show, but not before checking to make sure the packaging itself claimed it had closed-captioning available. Of course, when we tried it at home, it was the same story. No captioning options and no secret trick to suddenly have captioning become available. I felt defeated.

I mean here is a popular TV show that is current, and they don’t include closed-captioning when they do if people watch it live on TV? Why buy the damn DVD? I mean some older shows that have been released on DVD in recent years have subtitles/captions. If they can do it, certainly Lionsgate (the entertainment company behind The Royals) can man up and do the same for a current and popular TV show. And if they’re not going to, why in the world would they state that they do! For me this just adds insult to injury.

I just truly do not understand why closed-captions aren’t standard practice when making ANY DVD. It’s one thing if it’s homemade or if it’s an old program and transcripts may not be available, but for anything that is current and available for purchase – why the heck not? And if studios and manufacturers are going to be stupid (because this is stupid, and makes no sense – they’re encouraging people with money not to buy their products by doing this) and exclude an entire group of people from enjoying what they’re selling – why would they specifically state on the packaging that they are being inclusive? I mean that just seems like they’re leaving themselves open to backlash of some kind, and perhaps even a lawsuit (hey I would never, but I’m just saying, specifically stating a product comes with X when it doesn’t – that’s a legal thing).

I can only hope that entertainment companies and DVD manufacturers get smart and start making closed-captioning standard practice. Or at the very least, not claim to offer captioning when they have done no such thing. :/

*We contacted Amazon about The Royals lacking subtitles and they updated the info so it no longer states that it does, though the box/cover obviously says that it does. Amazon has yet to update it’s product information on The Scribbler.

0 Responses to DVD Subtitles: Why Is It So Hard?