Today was a day when the fair state of Nebraska (it’s one of the ones in the middle) joined so many other states on the right side of history, and said, “Yes,” to same-sex marriage. Well, not quite. Technically, a federal judge struck down their ban on same-sex unions calling it unconstitutional. Damn straight! Pun intended. 😉

A lot of my friends are celebrating. Why? Oh, did I forget to mention I’m originally from Nebraska? That’s because I don’t claim it. When I went to Los Angeles for graduate school, and moved back for two years, people in Nebraska never guessed I was a native, and this was a compliment. I just told them, I was from L.A. because it wasn’t technically a lie. (When I lived there before graduate school, people always assumed I was from New York. Apparently it wasn’t just my attitude, but the fact that I walk with a purpose. shrug) So, my social media newsfeeds are blowing up with friends, some who still live there and others who don’t, rejoicing. And I might “like” their comments, but I am keeping tight-lipped about the whole thing, because I don’t want to be the rain that pushes away the rainbow. But here is my response:

Welcome to the year 2015. Please stay awhile, even though I’m quite sure you won’t.

You see the judge who struck down than ban yesterday, first put into effect in 2000, struck down the same ban in 2005, and the 8th Circuit Court of Appeals reinstated it a year later. And Nebraska’s Attorney General expected this, and already had the appeal ready to go. I hate seeing history repeat itself, but in Nebraska it seems to be an endless cycle.

But this post is not about my opinions on the Cornhusker State itself, it’s about what’s right, and what’s not. Before I actually say a word about same-sex marriage, I want to say this. Nebraska’s Governor, Pete Ricketts, and Attorney General, Doug Peterson, are adamant that Nebraska’s ban on same-sex marriage reflects the will of 70% of their population. And that would be false. You see, those numbers are from the year 2000, and they do not reflect the people today. I’m not saying that if it was left up to the people again – that it would turn out well for same-sex marriage. I hope so, but I’m not 100%, but that is because I know that either way it would be incredibly close. Many people were not old enough to vote in 2000, but now they are and still reside in the state, never supported the ban, and many adults who were for the ban, have changed their stance, while others for the ban have passed away. This isn’t insensitive, it’s demographics. Most of the opposition are of a certain age, and times are changing and the power and voice of the people are just a tad younger (don’t worry it’s still a RED state).

Many polls that have appeared in the papers or on local news websites echo that the majority of Nebraskans no longer support a ban on same-sex marriage. The latest poll on KETV’s website shows that out of 9,100 people polled, 79% support overturning the constitutional ban on same-sex marriage. But those in power, who are supposed to lead, are more interested in being bullies and clinging to their bigoted views at everyone else’s cost. And I do meant that literally, since it costs tax dollars to fight same-sex marriage and defending the ridiculous bans in court. Just like it costs even more money to fight an appeal. But hey, you pay your taxes so a bunch of bigoted bullies can squander it all away instead of investing in education or other things that actually benefits its citizens. Sounds about right…

And as far as same-sex marriage, I am not that political on my blog, just because it’s not what I love writing about (but trust me I am just full of political opinions), but if you’re not on board with same-sex marriage, my only response is, “Why?” I know some people who say it’s because of their religion. The ones who are more enlightened, state civil unions are fine, but marriage is about God and the church blah blah blah. Actually, even if gays and lesbians have a civil union, they are not protected. They’re missing out on hundreds of tax benefits, medical benefits, and the security to know that if something happened to their partner – they could not just be cast aside by any biological family, who may or may not have been in the deceased’s life because of their “lifestyle.” So it is a big frigging deal, legally speaking. And as far as those less sane, saying it undermines the sanctity of marriage, my response is… Sorry I was laughing too hard, and now I’m back.

People hide behind the Bible because they have to reinforce their own fear and hate. And it is that simple. The Bible says a lot of things. Most “extremists” say you can’t pick and choose your Bible, but they seem to do it all of the time. For example, premarital sex, or any sex, even between a married couple, that cannot biologically produce a child is a sin. That doesn’t mean it’s a sin if you have sex with your spouse and hoped to get pregnant and didn’t, but if you used any sort of contraception or if one of you is unable to have children – sin, sin, sin. Men shouldn’t shave off their beards, no one should wear mixed cloths, and don’t even get me started on divorce. And what is acceptable? Rapists can marry their victims, brothers can marry their sisters and polygamy is encouraged. Hey, don’t blame me, it’s all in the Bible. And that’s the point. Anyone can fixate on a single thing in the Bible, but it doesn’t make it right. And there are obviously some ridiculous so-called sins in there, not to mention some absolutely repulsive things that are biblically acceptable.

I didn’t mean to sound so harsh, but I get kind of tired about this whole question of morality. Love is love. Gay or straight, it doesn’t matter. It’s just love, and love is a gift, and if you’re religious, then you believe it’s a gift from God himself. So, stop screwing up the message already! 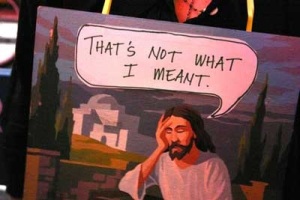