Getting My Bake On: Sugar Highs And Cupcakes Of Love

I have a confession to make. I have a bit of a sweet tooth. All right, that’s a bit misleading… I have one heck of a sweet tooth! I mean I love chocolate and candy and cookies and cakes, pastries and, and… well it would be easier to list the sweet things I don’t like, because that list is short, and I’d really have to think about it. I think that’s why I enjoy baking so much. See, I love being in the kitchen and making up recipes – both cooking, and baking. But I’m never fully satisfied when I cook. I mean whenever I make a new dish, and Roy (my husband) raves about it, I’m always thinking, “What could I have done differently?” Because whatever I cook never really measures up to what I wanted to do. I don’t let it get to me, but I think that’s why, even when I create a hit, I am only 90% good with it. But not so much when I bake.

Maybe it’s the sugar high, but when I bake, I might worry about how people will like it (if it is something I have never attempted before) but when I take a bite, it’s pure love. And the thing I love making the most by far, is cupcakes. I’m not sure why I love baking cupcakes above all else, because to be clear about something right now, my cupcakes are not pretty. And the few times I have tried to make cupcakes that look good, have been the few times when it isn’t true love – it’s more some sort of like.

I’m big on making my own cupcakes from scratch and I feel like I am designing different batters. I’ll play with ways to bring out a certain flavor or mix things that shouldn’t go together to make something wonderful (like turning butterscotch something into a pumpkin pie flavor). Sometimes I’ll Google a type of cupcake I want to make. If it’s not that original of an idea, there are sure to be tons of recipes, and then I spend hours reading through them and their reviews and take a little from one, and something else from another, add some of my own, and considering reviewers experiences until I have my own recipe. And if it really is an original idea, and there just aren’t a lot of (or any) recipes out there, I use a lot of guesswork. It’s fun, thrilling, and in the case that it is truly original, the first time is nerve-wracking. But it’s always worth it.

Frosting is a little easier, but much of what I just described – whether it is a cream cheese frosting or a buttercream frosting or on special occasions some type of meringue, it is a combination of research and guesswork. The real challenge comes with pairing the right frosting with the right cupcake. I feel like a matchmaker and the pressure of a lifelong commitment that is the marriage between cake and frosting is completely on me. (Hey, I’m a perfectionist – if I didn’t put insane pressure on myself then what’s the point?)

So, yesterday (Wednesday) I made cupcakes for Roy to take to work with him today (Thursday). I can’t ever just do cupcakes, for me it’s like any other creative exercise. It has to have meaning and if the effort or “wow” factor isn’t there, why don’t you just buy some from the bakery? Whenever I get ready to make a new recipe, Roy is always like, “Remember, keep it simple.” The last time he told me this was last week, regarding the cupcakes I made yesterday, and I shot him a look and said, “If you want simple, pick some up at the store.”

Now I don’t mean baking is stressful or complicated, but to my husband, unless it comes in a box with idiot-proof instructions it is not simple. And I loathe resorting to boxes. I mean that’s what I would do if I was recovering from major surgery or something; it is not something I would do just to “keep things simple.”

Anyway, the occasion was celebratory – Roy’s coworker just adopted a beautiful baby girl. So I instantly started thinking of cupcakes you might find at a baby shower, and the only request was that they be pink. I would never tell Roy’s coworkers exactly how much time I put into thinking about what I would make, because I don’t want to be labeled as “crazy,” and I do have a life, trust me. But again, I’m a perfectionist. The first task was figuring out what kind of cupcakes to make. My gut was “strawberry,” because of the whole pink thing. But that seemed too easy or plain, so I looked up dozens of recipes for baby shower cupcakes, strawberry cupcakes, baby girl cupcakes and any other pink cupcake out there. This took a few days (if I did it all at once, probably four or five hours). I narrowed it down to strawberry-vanilla layer cupcakes, my own spin on a strawberry cupcake, raspberry lemonade cupcakes and strawberry/chocolate cupcakes. I presented the ideas to my husband and swore each recipe would be simple – though not his kind of simple. I just wanted to know what he thought everyone in his office would like the most. He picked the layer cupcakes, which surprised me because they’re probably the least simple of all of them, and since I have never done layers in cupcakes (I have done them so much in regular cakes has become a science though) I totally wanted to try. It was like Roy read my mind or something.

When it came time to making them, I was worried (to put it mildly). I wanted both the vanilla and strawberry cupcake batters to be special. And I had to figure out the strawberry jam that I would use as a kind of cement to hold the layers together, and I had to cut all of the cupcakes without making a mess or having them fall apart, and then came the frosting… and what if it all went to hell? Well, this is always my process with a new recipe. I either worry if I can execute everything properly or if it is an easier recipe, I worry about the cupcakes being good, or “special,” because I want everything I make to be special.

But once I got started, I felt a lot better. The batter was easy once I figured out my proportions. I still don’t know if it tastes “special” because Roy’s co-workers haven’t tasted them yet (at least not at the time I wrote this post). The cutting the cupcakes up wasn’t as bad as I thought it could be, and neither was the jam. I just had to give them enough time to cool before I tried anything. The final touch was the frosting, which I hope I got right. I had so many choices when thinking of the right frosting for these cupcakes and referenced so many recipes that there were too many good ideas to put into a single recipe. So I had to get decisive, and well, when it comes to creative processes I can struggle with that at times. 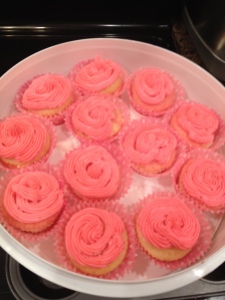 Still, I feel good about the end result, and I hope that Roy’s coworkers really like them (I know they’ll say that to be polite, so I want them to REALLY like them). I made some extra for the new dad to take home to his wife and share, because after all, if anyone is in need of a sugar rush it’s brand new parents to a tiny infant. Can I get an “Amen?” 😉