Saturday night I read that Fred Phelps, founder and (former) leader of the Westboro Baptist Church was essentially on his deathbed. I didn’t think anything of it, because I failed to care. I didn’t wish him death (bad thoughts take up far too much energy) but at the same time here was a man I could not stand, or stand to understand. I like to think I am diplomatic and fair (despite my hothead nature) but Phelps represents many things I think is wrong with religious extremists, skewing old religious doctrine to their own hateful agendas. Not to mention, I have had my own run-ins with the man and his family and they have the ability to take something from me with every confrontation… for a moment, only a few seconds really, I question whether people are fundamentally good or whether they have to work hard to be decent. I hate questioning my belief system; I like to think it is unshakeable.

The Westboro Baptist Church is nothing more than a toxic cult in my opinion. Phelps’s family makes up most of its membership. They have made a name for themselves by picketing events or places that they viewed were ‘tolerant of homosexuality’, namely funerals. They started in the 1990’s but most people were not aware of them until after 9/11 when they started picketing military funerals. Apparently, the war in Iraq is God’s revenge on America for its tolerance of homosexuality. Their website is www.godhatesfags.com. To say they are crazy would be stating the obvious and yet it doesn’t do justice to the poison they keep trying to spread.

My first run-in with the Phelps clan was back in 2000 when they picketed a friend’s funeral. I was furious and helped organize a picket to their picket. I was in high school and I was much less diplomatic then and much more of a ‘may my enemies burn forever in my wrath’ kind of upstart. My friend had died and it was a terrible shock (he was seventeen) and imagine what it was like for the people who were even closer to him. What would his parents think with a few dozen people picketing their only son’s funeral, yelling things about him burning in hell and holding up signs that state “God Hates Fags”? It made me angry. They should be allowed to mourn in peace; everyone should be given that basic respect. 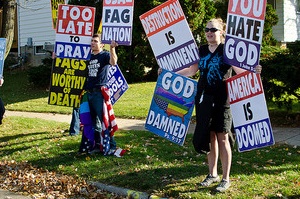 I was fifteen and yet I was hunting for a taser and hoping I could find one that would go the distance of forty feet (how far I would be from him). No such luck. (To this day, even my husband, Roy, refuses to get me a taser, can you believe that?) It didn’t come to blows but the hate was hard to take. I wasn’t new to the cause and being on the front lines of a ‘hot button issue’ that should not have been an issue at all meant I had heard a lot, seen even more and yet this was something else entirely. There are lines that are not crossed in war – unspoken rules that both sides respect. This was a violation. Let us bury our loved ones in peace. Fourteen years later and every time I hear about that cult or that man I have to put myself in check. I will not get worked up. I will not get angry. They will not win. Sometimes it is easier said than done.

My husband has a crazy born-again aunt who I have not met, and only experienced from afar. She has told everyone in the family that they are going to hell for one reason or another and because my husband’s family is so incredibly passive they just sit there and take it. Let the woman say something in front of me and I guarantee any diplomacy will be out the window before anyone else can blink.

I remember when she sent a letter to my husband, saying how she could not attend our wedding. She refused to acknowledge me and then offered to pray for his eternal salvation. There was a lot of hateful filler and I was not prepared for my reaction to it. I had foolishly thought that since I knew she was crazy and had an idea of what she would say I would not get upset. If the letter was addressed to me that statement would be accurate. However, I am fiercely protective of those I love and someone is better off to be cruel to me than they are to be indifferent to someone I care about. I’m just hardwired that way.

My husband wasn’t fazed and that was probably her only saving grace because while I prefer to be articulate I can throw down with the best of them. I did meet her daughter (the crazy aunt’s) once, a few days after brain surgery. She was cold to me and I said something to Roy about it. He assured me that his cousin was probably just busy with her kids. I knew that wasn’t it, but tried to shake it off as my instincts being off because of the hole in my head. But I wasn’t. Hate breeds hate and it is that much harder to break away from. His cousin has three children and I feel incredibly sad for each of them, much like I feel sad for those in the Phelps family, both those who have broken free from their warped sense of reality and those who are still deranged.

His cousin had a child out of wedlock (just like the Westboro Church’s spokesperson and Fred’s daughter, Shirley, did) and yet Roy’s parents are going to hell because they are Presbyterian, Roy and his siblings are going to hell for (pick a reason really) and I have never even registered enough to go to hell. Lucky me? I have a theory that Roy’s aunt has never actually been put in her place, more passive-aggressive with a demented sense of moral superiority that she could not handle someone with plenty to fire right back at her. I was born and raised hardcore Catholic (I do not consider myself Catholic however, more like recovering) so I know my bible. I will match her scripture for scripture and then let her know exactly what she can do with it the same way I used to with many a priest. Set them up by having them repeat the bible is the word of God and must be taken literally (no passage to be left out) and then quote the passage that means they’ll be burning like the rest of us and go from there.

I have no intention of starting anything and I would mind my manners so long as she did, but given what happened with her daughter, I know she won’t, and I have no qualms about finishing whatever she starts. But I remind myself while I should be aware, I will hope they will grow by the time I see them and say nothing – try to be the good Christians they proclaim to be. Hope is powerful and people can change. It doesn’t mean they will, but you hope they do and make sure you do not lower yourself to their level. (Yes, while I can get quite worked up when thinking about Roy’s crazy aunt, it is coming from a place of love, not hate. I love my husband will defend him, shield him and protect him from anyone who means him harm. I am going to be once fierce mama bear when I have kids. I chalk it up to that.)

This morning my husband asked me if I had heard about Fred Phelps and his expected sooner-rather-than-later exit from this life. I said I had and it was all I had to say, at least then. Now that I have thought about it there are a few other things I have to say. I find it incredibly sad such hatred still exists and Phelps has brainwashed his children and they have brainwashed their children to live a life full of hatred, anger and fear. But there is nothing to do about that. I admit my kneejerk reaction was, “I wonder if anyone will picket his funeral?” or more along the lines of “wouldn’t that be a sight to see”. This was the eye for an eye mentality (again, it is a wiring thing). 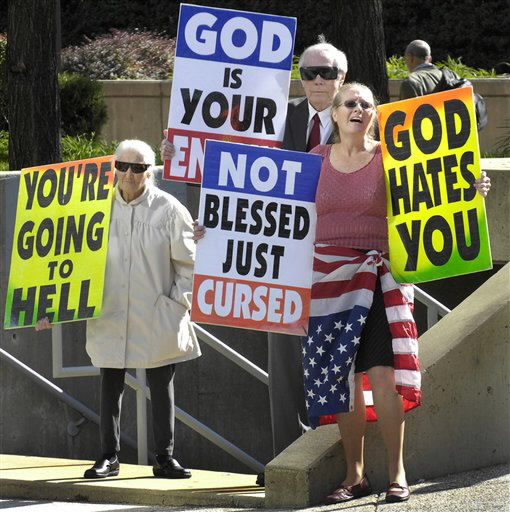 Justice is something that matters more to me than almost any other concept on this earth (almost, love will always transcend anything else). The more I think about it, however, the more I hope that no one bothers to picket his funeral. Let the man die and afford his warped kin the opportunity they take away from so many other people. Not because they deserve it, but because it is the right thing, and to give the Westboro Church a taste of their own medicine is just one step closer to becoming like them.