Okay, so yesterday I was on social media after writing a review, thinking about topics for future blog posts when I came across something I thought must be an exaggerated, inaccurate or “spoof” article because it was just too much. It was regarding a “pro-rape” blogger organizing rallies across the country. As soon as I saw this, I stopped. Pro-rape? I mean, I’ve blogged before about living in a rape culture and how so many things are ridiculous like: penalties for rapists, difficulty in convicting rapists, victim-blame, objectification… the list goes on. But to actually have someone say, “I am for rape. I think it’s great and should be legal. Screw the women who say no.” Um, wow. I didn’t realize we had gone off the deep end yet. But apparently we already have.

“I propose that we make the violent taking of a woman not punishable by law when done off public grounds,” Daryush Valizadeh said in a blog post in February 2015.

I thought that was bad, but it only gets worse. Valizadeh, known as Roosh to his followers called for his followers to come out proudly about how they hate women, but also need sex, which is why they “work so hard” to date them. Roosh himself is a “pickup artist” who has expertise in women that can help his fans get dates. I’m not even going to comment on the absurdity of this statement, just going to leave it right there.

Contrary to some claims, these meet-ups are not formal protests to legalize rape, they’re just a bunch of men getting together and bonding over their mutual enemy – the women they are trying to pick up!

“Up to now, the enemy has been able to exert their power by isolating us and attacking with shrieking mobs, but we’ll be able to neutralize that tactic by amassing in high numbers come February 6,” Roosh wrote. “I will exact furious retribution upon anyone who challenges you in public on that date.”

Despite the call for these men to come forward proudly, much of the protocol for these meetings is soaked in shame. For one, while the meeting spots in each city are public on the group’s Facebook page, members have to ask a secret question and know the “right answer” in order to find their hateful comrades.

“Do you know where I can find a pet shop?” And the response they’re hoping for is, “Yes, it’s right here.” Of course such events may not attract the brightest crowd, so the event’s page goes on to warn people not to proceed to the nearest pet shop.

And again while this is supposedly about pride, Roosh asks that counterprotesters not record or identify any of the members – because if word got out that they were hateful misogynists who dreamed of rape, it might affect their employment and private lives… Gee, you don’t say.

The group also says that it “vehemently” opposes women as well as gay and trans men (also men under the age of 21), so they are not welcome as these meet-ups. Perhaps, I should be glad I’m not welcome at such events, but mostly I’m still shocked and baffled and then disappointed that I am shocked and baffled that such hate can manifest with so many, and then on top of that – organize!

The thing is, I shouldn’t be surprised. I have experienced and/or witnessed firsthand, all kinds of hate over the last three decades: Homophobia, heterosexism, racism, anti-Semitism, ablism (discrimination or views against the disabled) and sexism. And that’s just scratching the surface. I’ve found myself taking on hatemongers like the Westboro Baptist Church before – I know the crazies are out there. And so many crazies are anti-woman, but even for anti-woman zealots, endorsing and promoting rape seems a bit much. Rarely are the craziest of crazies going to publicly endorse violence against women. I mean, that’s just crazy!

But here is something else to chew on – it isn’t that crazy. And you shouldn’t be surprised either. We live in a rape culture. For those who have heard the term, but are not sure exactly what that is, here goes: “Rape Culture is an environment in which rape is prevalent and in which sexual violence against women is normalized and excused in the media and popular culture.” Victim-blame and excusing the offender is the name of the game here and you see it more than you think.

For example, why should girls be sent home from school if their shoulders are bare, or a bra strap is exposed or their shorts are deemed too short? Because they’re a distraction, right? Well, instead of shaming the girls why not teach boys not to be distracted and objectify the girls in question? I know, I know… that’s a little too radical, right? How many times are victims not believed? How many times do questions like, “What was she wearing?” or “What did she say?” come up? Why do these things matter? You want to know how to prevent rape? Here it is: 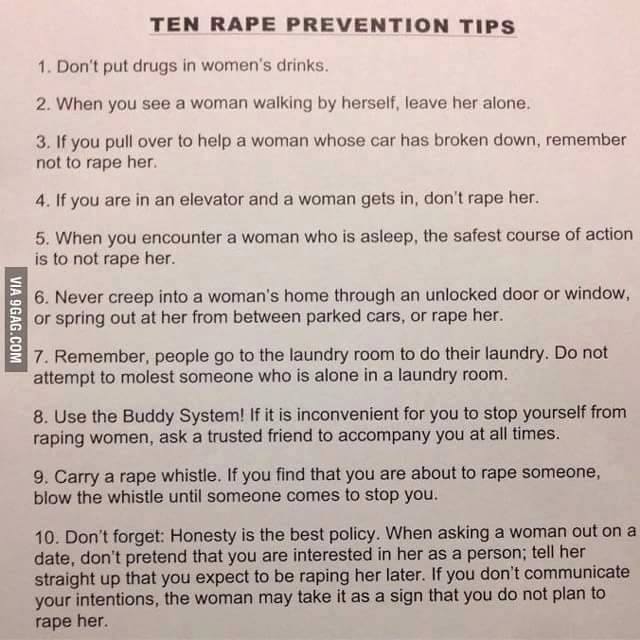 And it’s just that simple. Rapists or would-be-rapists making the choice not to rape. Or am I being too radical again?

I am not usually an optimist but while hearing news that Roosh and his group “Return of Kings” actually exists is scary, disappointing and surprising not surprising, I hope that maybe it will also open more people’s eyes. Rape culture is not a myth, or a bunch of feminists trying to rile people up in support of their cause – it’s a real state that we live in, and it is not just part of the problem – it is the problem.

As a society we can’t control individuals who act out of violence or hate. But we can send a clear message of what’s okay and what’s not okay. We can teach and lead by example and stop vilifying victims but focus that shame on the actual offenders. Maybe we’ll get some better laws, better punishments. Because if you’re arrested for having marijuana in a state where it isn’t legalized, you’ll likely do more time than a man convicted of an especially brutal rape. And please tell me you think that’s kind of (not kind of, it is) fucked up.

I think that’s all I have to say because I’m trying to be the bigger person, more “Zen” and less reckless. But I will say that my twenty-year-old self would go to one of these meet-ups and make sure I got clear face shots and possible voice recordings of every single bastard there. Then I’d do a background check and post their personal info all over the web for the world to see. Let’s see how proud they are then… But alas, I’m not that person anymore (and to be clear, I am not saying you should do this, this group is dangerous and has particularly disturbing views on mass murdering women). Still, right about now I wish I believed in karma and that it would pay each participatory scumbag a visit soon. Remember I said “trying” to be the bigger person, I’m far from perfect.

But in reality I do hope some people may come away from this and think, “You know, maybe there is something to this rape culture thing. Maybe it’s not just a bunch of angry women trying to start something. Maybe things need to change.”

They do. And I hope that monsters like these only help facilitate that change – the sooner, the better.